The dramatic large overhangs on the south wall facing the pond shield the home from unwanted summer solar gain, while the walls of glass provide passive solar heating in winter. Lindal’s signature Western Red Cedar siding complements the design.
A technology investment banker and an emerging-markets specialist, together for 13 years, traded an architect-designed loft in Chelsea for new construction in the Dutchess County town of Milan. They thought it would be a more wholesome and nature-centered environment in which to raise their two daughters, now ages seven and four.

The financiers, who asked that their names not be published, love New York City and all that it has to offer, but found it “a little too sophisticated, perhaps too early” for their daughters. One of the men is a lanky distance runner who grew up in North Carolina and the other is a children’s soccer coach of Cuban heritage, born in Puerto Rico. They imagined childhoods for their girls that more closely resembled their own. After some investigation, they rented a house in Milan a couple of years ago because the schools had a good reputation. They put their loft on the market, where it sat for a while. One of the fathers commuted into the city a couple of days a week, while the other worked at home and took care of the kids with the help of a nanny. Then someone who had looked at their loft a while back made a surprise offer. 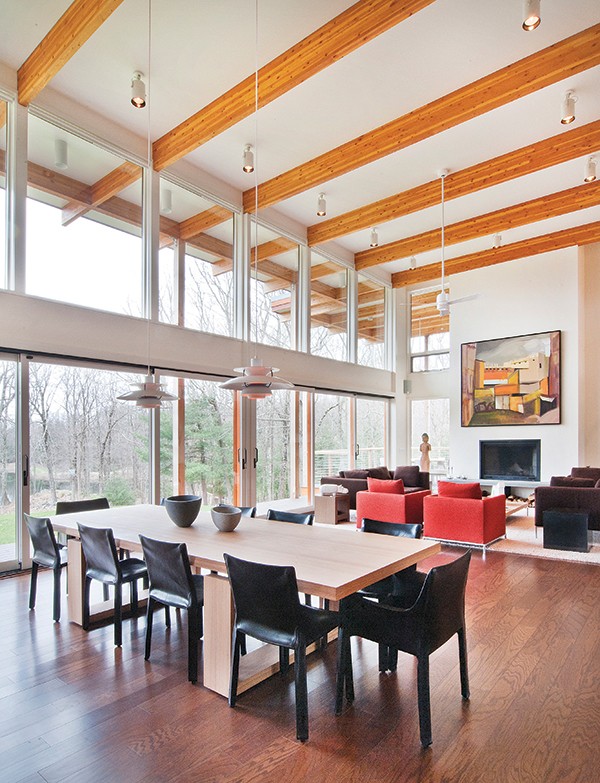 The dining area and great room’s two-story walls of glass overlook the private pond. The post-and-beam construction emphasizes the strength of the home.

“At that point we were ready to commit to the Hudson Valley,” says the tech banker. “We’d been looking at property, and now we were able to buy what we really wanted, which was a 90-acre tract with a large man-made lake, a beautiful piece of land that had been owned by a city doctor since 1961, and an improvement project that I expect will keep me busy clearing brush for the rest of my life.”

They Asked Their Architect to Design a Lindal
They closed on the land in August 2011. Because they’d had plenty of time to contemplate their dream digs, and possess discriminating taste coupled with in-depth knowledge of modern construction methods, they knew they wanted to build a custom-designed Lindal post-and-beam home. Founded in 1945, Seattle-based Lindal Cedar Homes Inc. is the world’s largest provider of prefabricated cedar homes. While best known for a characteristic prow design with large walls of glass, not all Lindal homes look like ski lodges, although the clean lines and abundance of light do tend to lend them a we’re-on-vacation-every-day vibe. The company is known for its precision engineering, great quality, and customer service. Lindal sells its homes through independently owned dealerships. Atlantic Custom Homes, owned by Greg and Jan Buhler, sold the bankers theirs; the dealership owns a large model home in Cold Spring where prospective clients can check out all the different styles, features, and finishes Lindal offers in a relaxed and scenic setting. 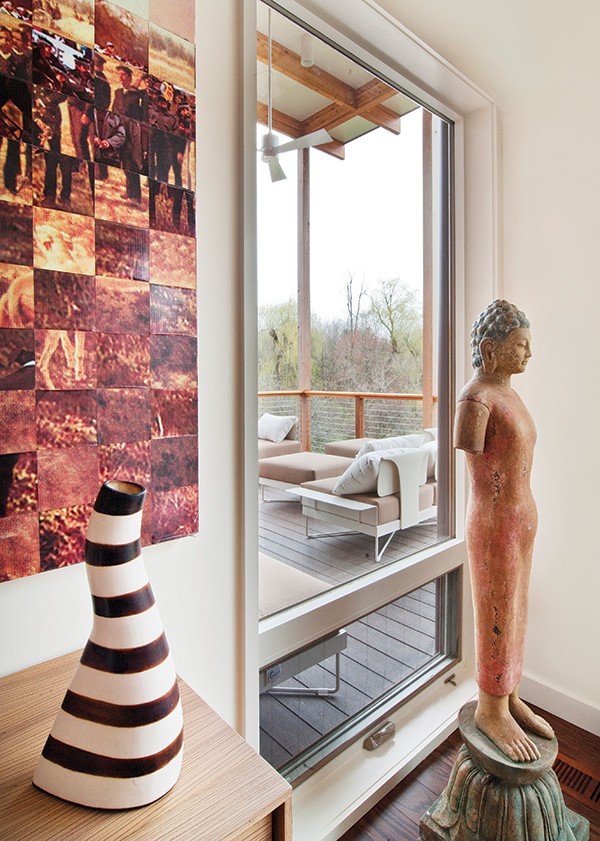 View through dining room window onto one of the back decks.

In recent years, as post-and-beam construction has snowballed in popularity, Lindal’s construction and design processes have kept pace. Each piece of a Lindal home is preengineered; it has an assigned place in the structure. The components are built in a centralized manufacturing facility and then delivered by train and truck to the construction site. Every aspect of reducing materials waste and enhancing thermal and aesthetic attributes has been refined. Not only is this prefabrication very green and cost-effective, but it also mightily speeds construction time, particularly when the builder uses crews experienced with Lindals. This home was built by Builtwell Builders Inc. in Tivoli. Most Lindals are completed in about five to seven months; site preparation, including obtaining permits, usually takes a couple of months. The Buhlers say Lindals are nicer to live in and hold their value better than modulars, and don’t necessarily cost more.

The couple asked Jim Bartholomew, the architect who designed their loft in Chelsea, to create a unique Lindal contemporary for their Milan property that met certain basic criteria and featured a wall of windows facing the four-acre lake.

“For me, the biggest thing which drew me to this project was working with Lindal Homes. It was a challenge to work within their vernacular and grid system, and I always like a challenge,” says Bartholomew. “Of course, it’s always great working on a second project with the same clients,” adds the architect. 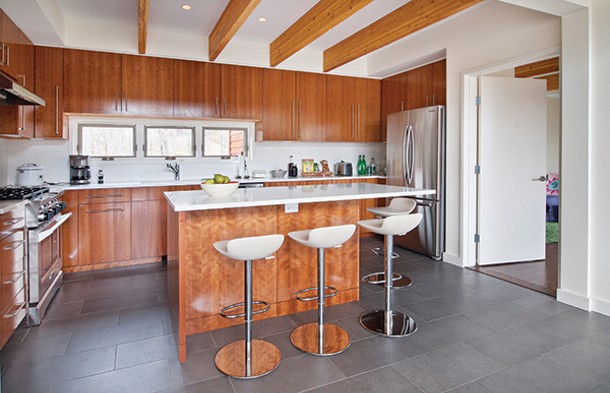 The modern kitchen is open to the dining area and great room,but separated by the island with its eating area.

They tore down an existing house. The foundation preparation began in mid-January 2012. The frame went up in early April, and the family was able to move in on November 15. The house is approximately 4,000 square feet, with four bedrooms, three and one-half baths, lots of built-in storage, 700 square feet of terraces, and red oak floors throughout. They plan to convert the 2,500-square-foot basement plus garage into a living or work area eventually. A large solar panel array provides about half of their electricity.

“The house is very contemporary, but all the rooms are standard; it won’t be hard to sell. But I hope to still be living here 20 years from now,” says the tech banker, adding that he looks forward to hosting more hockey parties out on the frozen lake in winter.

Shopping Isn’t Our Sport
“While we enjoyed the design process, we’re very busy with work and the kids, plus we just really trust Jim’s taste. We used the same neutral paint colors, the same kind of cabinetry, that we had in New York,” says the tech banker.

“Most of the furniture came from the loft, too. We don’t regard shopping as a sport. We buy something and we’re done with it,” says the emerging-markets specialist. He added that he was equally practical when selecting appliances for the new house. “Features and price, that’s it. That’s how we chose everything except the art,” he adds. Case in point: jumbo economy bottles of Suave shampoo in the otherwise sumptuous, if understated, master bath, featuring a dramatic walk-in shower.

The Art of Tourism
The couple used to travel overseas extensively. Most of their stunning collection comes from trips and was not produced by famous artists. They even have a piece made by a Cuban witch doctor. 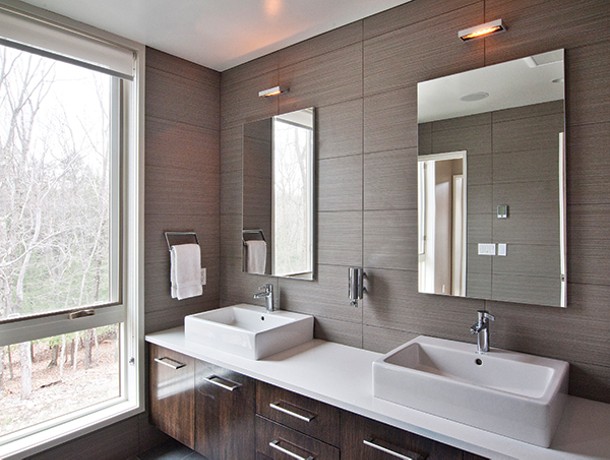 The master bath’s simplicity is accented by the ceramic tile walls.

Combined with the spectacular lake view, the two large artworks in the living room, La Conquista Perpetua (2002), by Leonel Luna, and Storm Over St. Petersburg (probably 2003), by Korodi Luca, “give us something new to discover every day,” says the emerging-markets specialist. 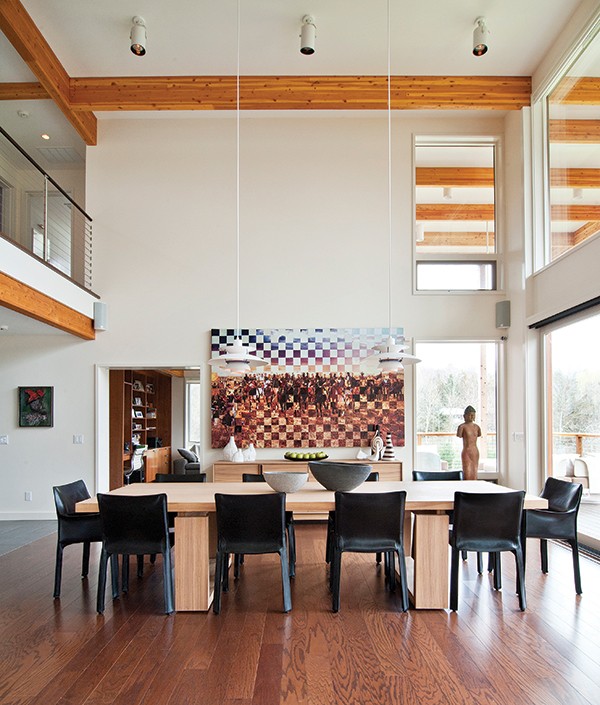 Leonel Luna’s digital print La Conquista Perptetua, which the couple picked while traveling in Mexico, graces the main wall of the dining room.

La Conquista is a digital print on vinyl they found in Mexico. The artist is a history buff who made a checkerboard collage interspersing contemporary images with a famous 1898 epic painting by the Uruguayan artist Manuel Blanes depicting the rise of Argentine president General Justo and the extermination of Patagonian aboriginals. The theme is something along the lines of same song, different verse, in that the characters remain the same while history repeats itself, says the emerging-markets specialist, adding that he likes that the work’s juxtaposition of old with new.

Storm is an abstract expressionist oil painting the couple purchased in Budapest on a summer vacation in 2004. “We loved the art at the hotel where we were staying and found out the name of the woman who had curated the hotel’s art. She was extremely nice and took us to meet various young artists in their home studios,” says the emerging-markets specialist. “This piece always reminds us of the back alleys and roads we like walking whenever we visit a new place. It reminds us to get off the beaten path and try new things, to look for the unexpected.”

Did you ever expect you would live this way? “Yes,” says the tech banker. “It just took awhile for us to achieve this goal.”